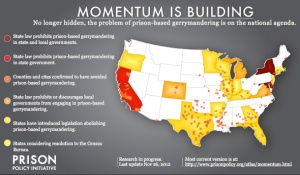 Prison Policy Initiative has been at the forefront of the longstanding dilemma where prisoners have been used to bulk up the populations of rural prison towns, while draining numbers from the urban centers they are arrested in.  The victories seen in the past several years show the value of having a central hub on a single issue.  Below is a sign-on letter getting major attention among people dealing with both political and prison issues.    I encourage people and organizations to add their support.

We are looking for organizations to sign this letter. The 4-page backgrounderabout this letter may be helpful. Don’t hesitate to contact us with questions or for a list of which organizations have already signed. Signatures are due February 6, 2013.

We are writing about the consequences of the Census Bureau’s policy of tabulating incarcerated people as residents of prison locations, rather than at their home addresses. We write as organizations with an interest in ensuring fair and equitable representation for all people and communities.

We are concerned that the Census Bureau’s tabulation procedures distort the redistricting process, giving extra political influence to people who live near prisons while diluting the votes of residents in every other legislative district. This practice skews democracy on both the state and local levels and is especially problematic for county and city governments, where a single prison can easily make up the majority of a district.

We know that even though the next census is seven years away, planning is already underway. For that reason, we urge the Bureau to conduct the research necessary at this early point in the planning process to ensure that the 2020 census can count incarcerated people at their home addresses.

As you know, the Census Bureau’s current “residence rules” instruct the Bureau to tabulate incarcerated people as residents of the prison location, even though incarcerated people are not considered residents of the prison location for other purposes. At the time of the nation’s first census, the question of where incarcerated people were counted was of little importance because very few people were behind bars. Today, nearly 1 percent of the U.S. adult population is incarcerated. By designating a prison cell as a residence, the Census Bureau concentrates a population that is disproportionately male, urban, and African-American or Latino in approximately 1,500 federal and state prisons that are far from their home communities.

Failing to count incarcerated people at home for redistricting purposes undermines the constitutional guarantee of “one person, one vote”, with critical implications for the health of our democracy. When the Census Bureau counts incarcerated people at the location of the facility, state or local governments that use “unadjusted” census data for redistricting grant extra weight to the votes of residents who live near the prison and dilute the votes of residents who do not. As the National Research Council of the National Academies reported in 2006, “[t]he evidence of political inequities in redistricting that can arise due to the counting of prisoners at the prison location is compelling.”[1]

Over the past decade, a growing number of stakeholders have urged the Bureau to update the “usual residence rule” to allow incarcerated persons to be tabulated as residents of their home addresses. Although much of this feedback was received too late to influence 2010 census planning, we commend the Bureau for making a useful change in the short time available: creating the Advance Group Quarters Summary File, which was released early in order to allow jurisdictions to identify and remove incarcerated populations for the purposes of drawing their new districts.

The overwhelming national trend is towards adjusting the census data used for redistricting purposes, but more progress is necessary. Four states, containing 21 percent of the U.S. population, passed legislation to adjust census data on their own. Both Maryland and New York passed legislation in time to reallocate incarcerated people to their home addresses for the most recent round of redistricting, and Maryland’s law was upheld by the U.S. Supreme Court.[2] Similarly, more than 200 counties and municipalities that contain prisons made their own adjustments to avoid drawing districts that give extra influence to those who live near prisons.

As former Census Bureau Director Robert Groves explained, the Bureau “re-evaluate[s] our ‘residence rules’ after each census, to keep pace with changes in the society. We’ll do that again after the 2010 Census.”[3] The interim measures taken by the Census Bureau and by individual state and local governments exhibit variety and creativity, but now the time is ripe for the Bureau to enact a national solution by changing how it tabulates incarcerated people.

We recognize that the Census Bureau seeks to conduct the fairest, most accurate, and most efficient census possible, and we understand that this undertaking requires decade-long preparations. We therefore urge you, in your research and planning for the 2020 census, to make developing a methodology to tabulate incarcerated people at their home addresses a near-term priority.

Such a change would provide a standardized national solution to the problem of redistricting distortion due to the tabulation of incarcerated populations, and would relieve state and local governments alike from undertaking piecemeal adjustments on their own. We urge you to take this window of opportunity when procedures for the next Census are being developed to ensure that the 2010 census will be the last to tabulate two million people outside their home communities.

We thank you for your careful consideration of this issue.

[1] National Research Council, Once, Only Once, and in the Right Place, (Washington DC: National Academies Press, 2006), 9.

Bruce Reilly is the Deputy Director of Voice of the Ex-Offender in New Orleans, LA. He is a graduate of Tulane Law School and author of NewJack's Guide to the Big House. Much of his writing can be found on www.Unprison.org.
View all posts by Bruce Reilly →
This entry was posted in Actions, Politics. Bookmark the permalink.