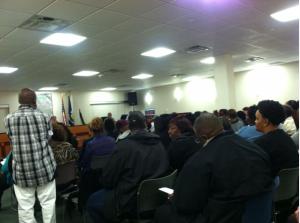 The public hearing held at Housing Authority of New Orleans (HANO), regarding criminal convictions, turned out to be three hours of praise, criticism, education, and a whole lot more from roughly 200 people.  For some, January 22nd was the first time they had a chance to address HANO federal receiver David Gilmore who, at one point, was called a dictator.  Considering there is no proper board nor local control at the moment, Gilmore holds the powers of a dictator.  It also means that his genuine steps in the direction of inclusion carries the weight of authority.

Leading up to the hearing, local media highlighted public criticism, as good government intentions often go awry when the details emerge.  As noted previously, considerable community input has been submitted to HANO.

I couldn’t stop wondering if Mr. Gilmore was an attorney, if he was familiar with Civil Rights law, or with HANO’s policies that were adopted before his tenure.  For example, he began the evening by clearly stating that the practice of excluding entire families who have a member with a felony conviction is not written in the policy.  I was the second person to testify, and pointed out that the 2011 HANO Admissions and Continued Occupancy Policy (ACOP) explicitly lists multiple barriers for those with criminal histories (with no need for an actual conviction).  I even read from page 23, barring all those with a conviction within the past 7 years for drug activity or violence.  He was appointed to fix HANO in 2009 and, in his defense, there has been a lot of work to do.

Mr. Gilmore also confirmed my suspicions that the Policy Statement issued by HANO weeks ago is only serving as a guiding set of principles- it is not an actual policy.  Many people still took issue with some of the vague terminology in the Statement, such as barring (from housing and employment) all sex offenders and those with a “history of domestic violence.”  Over the course of the hearing, Gilmore was told in various ways how the broad terms leave no room for degrees of criminal activity, nor someone being able to move on after serving their time.  He mentioned how abusers and serial child molesters are just “wired that way,” which some people would disagree with.  However, he heard from people who support domestic violence victims, or who have represented prostitutes, even someone convicted of a sex offense- all of whom educated Mr. Gilmore on the way the law can label a variety people for life, with consequences such as being barred from subsidized housing.  Nobody argued that living under I-10 was legal, safe, or contributes to a healthier New Orleans.

Many people expressed how employment and housing standards don’t match up in the same way- that one single policy cannot apply.  In a very nuanced way, perhaps a policy could, however the point was that someone’s criminal history should be relevant to the housing or job sought- or else not even considered.  This would be considered part of the EEOC Guidelines issued last year, which was the heart of my own testimony: that HANO’s policy should be drafted in a manner that protects them from Civil Rights lawsuits regarding Disparate Impact discrimination.  Written testimony from Voice of the Ex-Offender, Justice and Accountability Center, and Stand With Dignity all went into deeper detail of the EEOC significance.  The other night, however, Mr. Gilmore truly was not sure how the two agencies’ policies could conflict.

“If anyone can explain to me how this policy would violate civil rights laws, please let me know,” Gilmore said to the crowd, after about five references over the first two hours.  I shouted out that “I can” right now.  He asked that I write it on a paper, so I did- and handed it to a housing attorney for Southeast Louisiana Legal Services who had yet to testify.  He had prior experience in domestic violence, so he had much to say beyond a brief explanation of how the government has accepted that the criminal justice system disproportionately impacts People of Color, thus blanket discrimination via convictions will serve as a proxy for racial discrimination.  A policy needs to be tailored in ways that factor in the nature of the conviction, time elapsed, nature of the job, and an individualized assessment.

Mr. Gilmore never fully understood why it matters that a background check be done after there is an offer of employment, and nobody quite clarified: studies show that the presence of a record, regardless of the details, negatively influences the reviewer’s decision.  For many, there is an instant trashing of the application and the manager does not even see it (some online systems will filter out all who check “yes” to the question).  The applicant is not able to express their value as an employee, nor given an opportunity to explain the circumstances of their criminal record.  Studies show that given that chance for an interview, employment skyrockets.  Furthermore, I am not aware of any studies showing that employees with records have worse job performance than the unconvicted.  There is ample anecdotal evidence to suggest just the opposite.

“It doesn’t matter to me,” Mr. Gilmore finally pronounced.  “The question is off the application starting tomorrow,” referring to the question about criminal conviction.  The room applauded.

The matter of evictions became hotly contested, with conflicting stories regarding the facts of specific families.  A group from River Garden, a semi-autonomous mixed-income housing development that is federally subsidized and under the umbrella of HANO (like several other such properties, a growing trend), was very explicit:  “This is gentrification,” one said, as lower income people are replaced by those with higher income.  They explained how some people are targeted, others favored, anonymous tips serve as sole evidence; and even an attorney questioned how HANO oversees River Garden to ensure they follow policies.  When someone is evicted under the “1-Strike” drug policy, Gilmore admitted that they merely accept the report from a management agency, without further investigation.

Mr. Gilmore claimed there are only “two or three” evictions per month, and most are for failure to pay rent.  That people have to do something terrible for a third or fourth time.  Lacking the data in hand, I found it interesting that residents and legal workers would have such a drastically different view of the eviction issue.  One element that was very clear: residents felt that a guilty household member should be the only one evicted from HANO, not the entire family (as is practice, policy, and law).  Depending on the circumstances, HANO can (and has) evicted where there was no arrest, or where the criminal activity was not by a household member.  In Gilmore’s view, the head of household needs to be held responsible for all their family members.  In other areas of the law, that is simply illegal, but not so with public housing.

What is very critical for all parties to understand, all clashes aside, is the trends happening in New Orleans and in subsidized housing.  Katrina plays a role in that, as do changes in management and what influence profit-seeking developers may have in the landscape.  It cannot be disputed that criminal justice policies steadily convict family members at a rate faster than population growth.  There will come a time in the near future, where over 50% of African American families in New Orleans have a member with a criminal conviction.  Considering 1 in 7 Black males are under current supervision of the criminal justice system, those with a lifetime record are far higher.  We are likely near, or over, the 50% marker already.  Will HUD limit its mission to only those who have avoided the courts, or will it seek sustainable housing for all.

No timetable was laid out for developing the policy, nor did Mr. Gilmore mention who it is will help him hammer it out.  Hopefully, he would bring a group together representing both the impacted community members and experts in this area of the law.

Bruce Reilly is the Deputy Director of Voice of the Ex-Offender in New Orleans, LA. He is a graduate of Tulane Law School and author of NewJack's Guide to the Big House. Much of his writing can be found on www.Unprison.org.
View all posts by Bruce Reilly →
This entry was posted in Actions, Employment, Housing and tagged 1964 Civil Rights Act, Conviction, criminal record, David Gilmore, Equal Employment Opportunity Commission, evictions, Gilmore, Housing Authority of New Orleans, HUD, New Orleans, public housing. Bookmark the permalink.