Are Schools Violating the American With Disabilities Act Every Time a Kid Goes to Court? 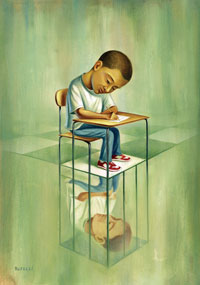 The most obvious federal grant money going to schools, in this scenario, is the federal program COPS in Schools (CIS).  According to the Department of Justice, CIS has provided over $753 million in federal dollars to subsidize the police deployment in schools.  Most, if not all, schools are tasked with educating children who have diagnosed mental illnesses and disabilities.  Many of these students have Individual Education Plans (IEPs) that account for their particular medical challenges.

When a school fails to provide for the IEP, which may necessitate particular counseling or an individualized setting, they may be violating the ADA.  When a student manifests their illness (“acting out”), and are then dealt with punitively: they are likely violating the ADA.  When the school police arrest them, especially for non-criminal conduct such as “creating a disturbance,” they are not only likely violating the ADA but also drawing in the juvenile justice system for complicity.  This means that judges, sheriffs, district attorneys and others may all be in violation of the ADA when the manifestation of a mental illness causes a denial of program activity.

Kids will act up, we know this.  Some kids have particular issues that are not being addressed which in turn heightens the child’s illness and practically induces the behavior that any psychologist would have anticipated.  Naming a child’s case as “difficult” does not release school officials from their responsibilities.  The worst case scenarios (expulsions and prisons) are happening on a daily basis following non-criminal behavior.

Creative attorneys may want to closely read the Americans with Disabilities Act.  Juvenile defenders may want to sit down with their friends who do education, health care, and class action cases.  This has gone on for far too long.

Bruce Reilly is the Deputy Director of Voice of the Ex-Offender in New Orleans, LA. He is a graduate of Tulane Law School and author of NewJack's Guide to the Big House. Much of his writing can be found on www.Unprison.org.
View all posts by Bruce Reilly →
This entry was posted in Courts, Education, Mental Health, prison economics and tagged ADA, Americans with disability act, children, COPS, education, juvenile, juvenile justice, mental illness, School-to-prison pipeline, student. Bookmark the permalink.

1 Response to Are Schools Violating the American With Disabilities Act Every Time a Kid Goes to Court?