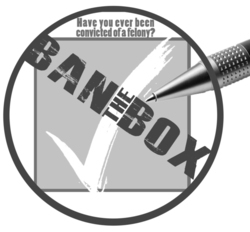 Yesterday, mere hours before the House passed “Ban the Box” (5507A) by a 62-3 vote, I spoke with a friend who had been told by a temp agency he is “toxic,” and they could never hire him. I said this wasn’t a good case for litigation under federal law. He didn’t care about suing anyone; he was just feeling down about his job search.  Unlike most of the 2014 college graduates (with dual degree Honors) my friend has a criminal record from age 16.

Later that day, the EEOC settled with one of the largest trucking companies in America. J.B. Hunt will change its blanket policy that prohibits hiring people with a criminal record, and instead follow the federal agency guidelines, that past crimes should be relevant to the job when used for denial.

I went to law school to receive more interviews, to explain why I would be a good fit for the job. I applied to 30 law schools that made decisions on paper, and do not offer interviews. I got rejected by all of them, yet got into half the schools where I spoke with someone.  I’ve since become a positive addition to both Tulane and New Orleans.

I’ve spoken recently with several friends out job hunting.  Some are husky like the actor James Gandolfini or David “Big Papi” Ortiz. Some are not as confident with their words.  Some are next to homeless. All have criminal records and yet none of this impacts their ability to do solid work. Over 150,000 people have gone through the ACI over the past few decades and those of us who “made it” learned to be flexible to survive. We learn to adjust our sights in the job market, but I urge you, as Governor, ensure that nobody has to stop looking.

Those of us with criminal histories, recent or long past, are your residents, your voters, and your people. We have families. Our children depend on us to set an example and pay the bills. We are looking to erode barriers after we have served our time. When we fail, the pain transcends past one individual, as we are forced to choose from different, less hopeful, options.  Yet when we succeed, that too ripples outward.  Last year, three of us from the ACI formed Transcending Through Education Foundation.  Just this past week we chose our inaugural scholarship winners from a strong pool of applicants.  These are people making the most of their situation, who are helping others, and we want to give them some support amidst (typically) a sea of negativity.

Those of us living with criminal convictions know that the only way to make up for what we’ve done, to our families and community, is to persevere and overcome the barriers. Returning to prison because we couldn’t find a job isn’t good for anyone. Fear is what fuels customs of exclusion. Not knowing someone makes it almost understandable. But such customs have been struck down and driven out of America in the past.

When we went door-to-door in 2006 to talk about voting rights, we learned that folks of all varieties believe we are all still residents, and everyone deserved a second chance. When we started awareness around Ban the Box, we’ve seen the growth of similar support. These are all pieces of a larger fabric to mend, to truly weave us into We The People. A people all in it together.

I raised this issue during your 2010 campaign and you responded as genuinely concerned and supportive.  Governor Chafee, please stay that course and sign this bill.

Bruce Reilly is a former organizer with Direct Action for Rights & Equality, current treasurer of Transcending Through Education Foundation, and a summer Ella Baker fellow for the Center for Constitutional Rights.  He is a third year law student at Tulane University, and continues to volunteer as a member of FICPM, VOTE, and National Lawyers Guild.  He will always be a member of DARE.

Bruce Reilly is the Deputy Director of Voice of the Ex-Offender in New Orleans, LA. He is a graduate of Tulane Law School and author of NewJack's Guide to the Big House. Much of his writing can be found on www.Unprison.org.
View all posts by Bruce Reilly →
This entry was posted in Employment, Legislation and tagged applications, Ban the Box, criminal record, Employment, jobs, legislation, Lincoln Chafee, Rhode Island. Bookmark the permalink.
Loading Comments...