Power of the Silent Marchers? 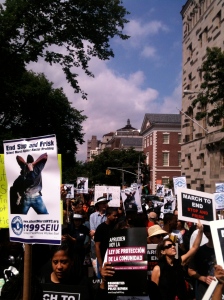 Today’s march down Fifth Avenue was more than just a Sunday stroll of pissed off activists.  Fathers and sons joined with thousands of others from all five boroughs of New York, to send a unified message to the NYPD, Ray Kelly, and Mayor Bloomberg: Learn Some Respect.  And as those fortunate enough to have wise fathers should have learned, “you need to show respect, to get respect.”  Stop & Frisk is disrespect.

The hundreds of police officers lining the street today received this message directly.  It was not spoken, it didn’t need to be.  The NYPD respectfully held their positions, and it is difficult to imagine them not hearing the deafening silence.  Children rode on shoulders, grandparents walked with straight backs, wheelchairs rolled, and hundreds of signs told the New York police that they need to stop the system of dehumanizing young Black and Latino men.

The law requires the police to have reasonable suspicion before harassing a resident- whether they are in a car or walking along.  The problem is that the police are trained to be suspicious of everything and everyone.  It just so happens that they aren’t very suspicious of a million tourists traveling through Times Square each week, but a few hundred kids walking home from Hunt’s Point apparently need to be corralled and shaken down.

It will be interesting if the next mayoral race becomes a referendum on the Stop and Frisk policy.   What the politicians should have seen today was a Voting Bloc- one that is weary- or as they say: “Sick and tired of being sick and tired.”  It is also interesting to question whether or not white voters truly support the policy- as this is clearly the only thing keeping Bloomberg’s confidence up as he defends the directive to shake down hundreds of innocent people per day.  Even notorious Maricopa County Sheriff Joe Arpaio laughs at the law and flaunts human rights- he plays to the 51% of Phoenix voters who agree with him.

Although the biggest donors to the NYPD are Goldman Sachs, Barclays Capital, and the like, there are far more voters in New York City living in public housing than those who serve the financial gods.  Incidentally, if they were “gods,” they wouldn’t need police protection.  Many of the 35,000 police officers don’t live in New York City, but it is cynical to believe that every one of them support the policy anyway.  An oppressive tactic creates added stress on the soldiers implementing it.

Rodney King’s passing should be a reminder to Commissioner Ray Kelly and Mayor Michael Bloomberg: The people of Los Angeles were willing to wait for the criminal justice system to hold the LAPD accountable.  When the system failed to do so, the city erupted into smoke and fire.  Last year the NYPD caused the taxpayers to fork over $135 million in litigation and settlements.  The Floyd class action lawsuit will indeed cost the city quite a pretty penny soon enough.   It is time to wonder which Sean Bell, Ramarley Graham, or Shantel Davis death will be the breaking point of a stressful relationship between the NYPD and the people of New York City.  Police officers have a stressful enough job when they are truly exemplifying “New York’s Finest,” they don’t need the harassment orders coming down from the Billionaire’s mansion.

Bruce Reilly is the Deputy Director of Voice of the Ex-Offender in New Orleans, LA. He is a graduate of Tulane Law School and author of NewJack's Guide to the Big House. Much of his writing can be found on www.Unprison.org.
View all posts by Bruce Reilly →
This entry was posted in Actions, Race and tagged Fifth Avenue, Floyd, Frisk, Michael Bloomberg, New York City, New York City Police Department, NYPD, Ramarley Graham, Rodney King, Sean Bell, Shantel Davis, silent march. Bookmark the permalink.

1 Response to Power of the Silent Marchers?