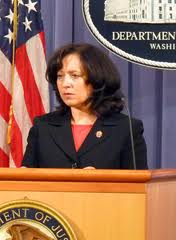 During tomorrow’s Senate Judiciary Committee, Senator Sheldon Whitehouse will have the opportunity to weigh in, and block, Obama’s appointment of Michele Leonhart as Director of the Drug Enforcement Agency.  Leonhart has served as interim director and is particularly known for her refusal to respect states’ Medical Marijuana laws.

Considering Rhode Island is among 15 states that have legalized marijuana for medical purposes, Senator Whitehouse has a duty to protect his constituents from federal interference.  Latest RI medical marijuana news can be found here. He can ask Ms. Leonhart:

Why the DEA refuses to heed the American Medical Association’s call to reschedulemarijuana from the top category (along with heroin and cocaine);

Why the DEA has ignored the 2009 Dept. of Justice memo calling on the feds to respect the rights of medical marijuana growers;

Why, regarding tens of thousand dead at the Border she said: “Our view is that the violence we have been seeing is a signpost of the success our very courageous Mexican counterparts are having,”Leonhart said. The cartels are acting out like caged animals, because they are caged animals.”  Is she implying that even more violence in America would be a sign of success in the drug war?

Call Senator Whitehouse today, and let him know that we need a forward thinking director of the DEA, not an old guard militant, because if we ever propose real solutions we want people in place who can handle it.

Bruce Reilly is the Deputy Director of Voice of the Ex-Offender in New Orleans, LA. He is a graduate of Tulane Law School and author of NewJack's Guide to the Big House. Much of his writing can be found on www.Unprison.org.
View all posts by Bruce Reilly →
This entry was posted in Drug Policy and tagged American Medical Association, Barack Obama, Drug Enforcement Administration, Medical cannabis, Michele Leonhart, Rhode Island, Sheldon Whitehouse, United States Senate Committee on the Judiciary. Bookmark the permalink.