What They Don’t Tell You About NYC Crime Data

Any study on “safety” would always be subjective.  What is “safe?”  It is a feeling, not a fact.  It is relative, and highly impacted by the media’s reporting of crimes- both near and far.  Looking at the NYPD’s crime reporting, it appears that the numbers and the rhetoric don’t always match up.

When the Village Voice ran an investigative piece with the help of NYPD officer Adrian Schoolcraft, it launched a general disbelief in the data being generated.  The incentive to downgrade serious crimes, while Stop & Frisk increases petty crimes, serves as a justification for “Broken Windows” tactics.  Criminologist John Eterno (former NYPD Captain) explains that the manipulation is systemic and not confined to Schoolcraft’s 81st Precinct.  The New York Times recently ran a study of 2,000 former police officials and found the same.

The manipulation of data is not confined to the NYPD.  Police in Memphis, Nashville, and Millwaukee, and Ft. Myers have all either been accused of or admitted to this illusion of success.  Some police have conducted their own audits and explained that there was no clear intent to mislead the public.  The broader issue is whether criminologists can trust the data they are given for analysis, and whether crime rates are reliable as a method of gauging public safety. High crime data contributed to NYPD receiving federal funding through the COPS program, and then a reduction of that funding when the data was reduced.

Claimed Benefits (Crime Reduction) Is Not Supported by Data

It appears that police policy has no correlation to violent crime stats; only to petty crime stats.  For example, as Stop & Frisk intensifies, crime rates do not fluctuate accordingly.  Violent crime is immune to increased patrolling, while petty crimes such as marijuana possession, obstruction of justice, and open container summons will increase due to police contact.  If policing were reflective of criminal activity, we could assume that White residents on the Upper West Side do not smoke marijuana, unlike Black and Latino residents of East New York.  Or, only Black and Latino people in the West Village drink in open containers.

Murder rates are a salacious, inaccurate, and commonly used indicator of overall crime.  They are generally reported prior to a conviction, often prior to a full investigation, and sometimes prior to an arrest.  Homicides represent less than 1% of crimes.   If the media reports there were 1000 murders last year, what they truly mean is 1000 people were killed in ways where it was not immediately justified and cleared.  There may be only 600 arrests, and they may be sitting on Rikers Island.  100 of them may have viable defenses.  100 may have plead guilty already, while 50 others may be wrongfully convicted.  With such a small sample, a murder rate can fluctuate with every single incident.

Looking at NYC as a whole, in isolation, does little to inform the public as to the effectiveness of the police force.  Crime has come down from the peak of the eighties and nineties, and back to levels of the 1970’s.  However, this is a long-recognized national trend.  By comparing NYC to the nine other largest American cities, we see that there is nothing particularly special about the Big Apple.  This assumes, of course, that data reported to the Bureau of Justice Statistics is compiled in the same manner by each police department.

NYC Crime has Gone UP!

Illustrating the allegations that NYPD has downgraded criminal reports to show a decrease in crime, observe these inter-related crimes:

Since the dawn of the Commissioner Kelly Stop and Frisk era, total crimes are down 2%.[11]  Meanwhile, total drug crimes have increased: 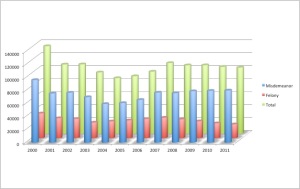 As Misdemeanor drug crimes increase, felony drug crimes decrease.  Does this reflect a reporting change?  Enforcement change?  Usage change?  A further example of trying to match data with reality can be found in Mayor Bloomberg and the NYPD’s challenging relationship with marijuana, and improperly arresting people who should be given citations only.

Do you believe, that catching people’s personal supply is impacting your safety?  Some do, and they are willing to pay billions of dollars to reinforce that policy.  Others are not at all convinced.

On a final statistical note:

Grand Larceny of an Auto has been reduced 380% since 2001.  It just so happens that manufacturing changes have drastically altered the ability to steal a car.  The police should not be blamed for everything, particularly where crime is related to many factors such as economics, social services, family stability, mental health treatment, and substance abuse (among other factors).  And to the same end, they should not be taking too much credit.

Read Part One of the series relating to Floyd v. New York City: “Crashing the System with Stop and Frisk.”

Up Next: “Comparing the Precincts:  Is the data plain as Black and White?”

See also: Revolt of the Gatekeepers

FICPM Statement on Stop and Frisk

[4] Figure 1.  NYC peaked in 1990, and follows a similar trajectory with L.A. and Dallas.  They had nearly the same rate: three highest in America’s large cities.  Dramatic reductions from 1993- 2000.  Reductions from 2002-2010 are minimal; far less than Dallas and L.A., and comparable to reductions in Houston and the national average.  Philly, Houston, and Las Vegas are the new top three, but modestly higher.

[6] Figure 3.  NYC peaked in 1990, tied with Chicago and Philly, less than Houston and Dallas.  Dramatic reduction came in 1993-1998, and has practically mirrored the national average since.    Philadelphia began the era in the middle of the pack, but is now the highest by virtue of having made no real gains; they are still far below the 1990-92 norm.

[7] Figure 4.  NYC is highest in 1985, yet with the lowest figure than all cities but San Diego.  Dallas, Houston, and San Antonio realized the greatest reductions, yet began at the top of the list.  Los Angeles and Phoenix reduced at a rate similar to NYC.    Philadelphia has had little impact in this area, and now is the nation’s highest by virtue of standing still.  The Rape and Murder rates have reduced at a similar pace, with rape traditionally being close to double that of murder; however, the percentage points have narrowed from 34 to 6 over the time span.

[8] Figure 5.  NYC peaked in 1990, and followed a similar trajectory downward as did Chicago and Los Angeles.  The sharpest decline came in 1991 – 2000.  San Diego and the national average are lower.

[10] Figure 7.  NYC peaked in 1988, at a rate similar to Houston, San Diego, Chicago, and Las Vegas.  Dallas and San Antonio were much higher.  The sharpest decline came between 1993- 1996.  Since 1994, when tied with Philadelphia, NYC has been the lowest rate and below the national average.  Philadelphia and Houston have seen the least changes, while San Antonio remains high despite the major decline. 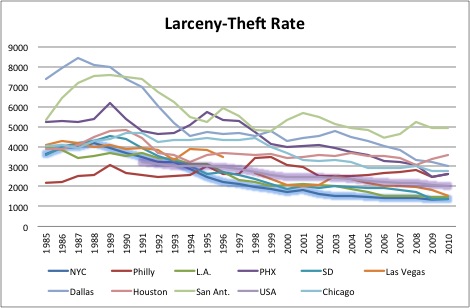 Bruce Reilly is the Deputy Director of Voice of the Ex-Offender in New Orleans, LA. He is a graduate of Tulane Law School and author of NewJack's Guide to the Big House. Much of his writing can be found on www.Unprison.org.
View all posts by Bruce Reilly →
This entry was posted in Police and tagged Bloomberg, Crime statistics, data, Frisk, New York City Police Department, NYC, NYPD, Public Safety, statistics, stop and frisk. Bookmark the permalink.